Showing posts from September 7, 2010
Show all

My son and I and our little trip to Savannah and Tybee Island.... 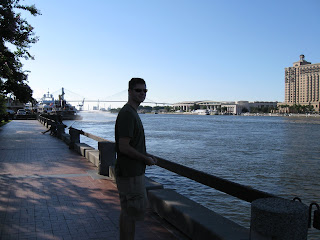 Hi Friends,
As promised I am posting some more pictures of our time down in Savannah and Tybee Island.
This is my son Andy down by the water front in Savannah.
We checked in and then we headed down by the river.
Savannah has the 4th largest port in America and unlike the other three ports like New York and San Francisco, Savannah's port has plenty of room for growth. There are many nice restaurants down by the river and that night we had some wonderful fish
by the river. After dinner we went on the Ghost tour of Savannah in a lovely black hearse!! Our driver is also a Fireman for Savannah so he had some very interesting tales to tell us!! This is one of the mighty Tug boats that push and pull the huge container ships that go in and out daily throught the Savannah river.
I think one of the crowning jewels in Savannah has to be her mighty Oak trees complete with Spanish Moss hanging from their limbs. The oldest Oak standing in Savannah is estimated to be around 275 years old. It stands in front of the old hospital that i…
7 comments
Read more
More posts

sjmcdowell
Georgia, United States
Creating from the heart in all things. I believe when you are creating from your own imagination and from the heart your spirit leaves an everlasting imprint of your soul in all that you do in this world...We can all make a difference to make this a better world.