Prayers and a Baby Girl on the Way... 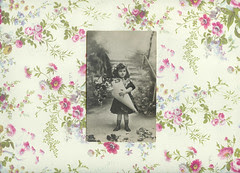 scan
Originally uploaded by sjmcdowell My oldest son Andy and his wife Dawn found out last week that their baby will be a girl. We have all been praying that all goes well this time,
as they lost their daughter a year and a half ago six weeks before she was due on Christmas eve. It was a very hard time because they had tried three times to become pregnant and with the Fragile X complications to make it worse. With Fragile X if it is a boy the chances are very slim for a normal life. Boys have physical as well as mental disabilities where as girls who have Fragile X can go undetected as my daughter in-law was till she had a blood test when they were trying to get pregnant a couple of years ago.
So this is great news and PLEASE say some prayers that this little girl will be healthy and that all will go well!! It has been such a heartbreaking trial these past two years and they want a baby so badly.
Just before they found out they were pregnant they had finished up the last of the paper work…
11 comments
Read more
More posts

sjmcdowell
Georgia, United States
Creating from the heart in all things. I believe when you are creating from your own imagination and from the heart your spirit leaves an everlasting imprint of your soul in all that you do in this world...We can all make a difference to make this a better world.